'Do not drink, do not boil' water:

from Toledo New Now
Toledo News Now, Breaking News, Weather, Sports, Toledo
Congresswoman Marcy Kaptur (Ohio-9) this evening called upon the U.S. Environmental Protection Agency (USEPA) to release immediately all water sample findings pertinent to the Toledo emergency.
Following a 30-minute conference call that her office arranged with Region 5 Administrator Susan Hedman earlier this evening, Congresswoman Kaptur urged the agency to increase general public understanding about the Toledo crisis by making the results available to the public.
“The public has a right to know,” she said to Administrator Hedman.
Read more about Kaptur’s concerns here.
Midway through day 2 of Toledo’s water crisis, residents who get water from the city of Toledo are still being told not to drink water which comes out of the tap.
Healthy adults can shower and do laundry, but water should not be ingested or used for brushing teeth. Dishes can be washed using tap water, but should be dried, then rinsed with bottled water and dried again before use.
The City of Toledo issued an urgent notice to residents of Toledo and Lucas County who receive water from the city of Toledo just after midnight on Saturday. Boiling water is useless to help the problem, as are all types of filters.
Chemists testing water at Toledo’s Collins Park Water Treatment Plant had two sample readings for test positive for microcystin.
Toledo Mayor D. Michael Collins says the United States EPA has requested multiple samples since the initial positive tests. Results of those tests are not expected until Sunday afternoon a, but Collins says “everything is trending in a positive direction.”
Ohio Governor John Kasich was in Toledo Sunday afternoon to meet with Collins and other area leaders. 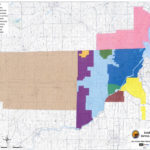 A map of the affected area 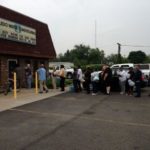 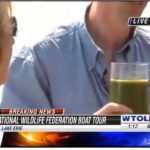 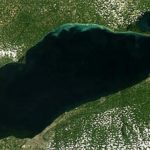 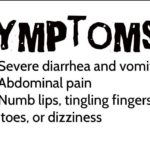 What to look for if you drank the toxic water 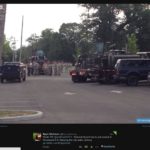 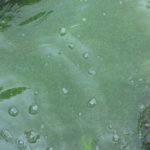 Algae bloom back on July 22 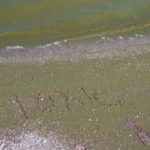 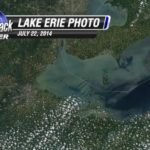 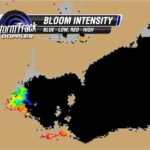 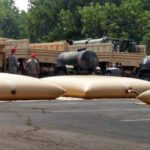 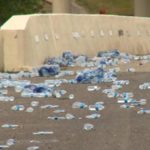 A truck carrying water bottles spilled its load on I-75 near I-475.

The health department says it is critical that residents know the following:

Residents should not drink the water coming from their tap until an “all clear” has been issued.
The City of Oregon is not affected, as the city has its own water treatment plant with a separate intake in the lake.
Governor Kasich has declared a state of emergency and activated the National Guard. Kasich is expected to reach Toledo around
Here’s additional information from the City of Toledo:
What should you do:
DO NOT DRINK THE WATER. Alternative water should be used for drinking, making infant formula, making ice, brushing teeth and preparing food. Pets should not drink the water.
DO NOT BOIL THE WATER. Boiling the water will not destroy the toxins – it will increase the concentration of the toxins.
Consuming water containing algal toxins may result in abnormal liver function, diarrhea, vomiting, nausea, numbness or dizziness. Seek medical attention if you feel you have been exposed to algal toxins and are having adverse health effects. Skin contact with contaminated water can cause irritation or rashes. Contact a veterinarian immediately if pets or livestock show signs of illness.
What happened? What is being done?
Lake Erie, which is a source of drinking water for the Toledo water system may have been impacted by a harmful algal bloom (HAB). These organisms are capable of producing a number of toxins that may pose a risk to human and animal health. HABs occur when excess nitrogen and phosphorus are present in lakes and streams. Such nutrients can come from runoff of over-fertilized fields and lawns, from malfunctioning septic systems and from livestock pens.
Additional monitoring is being conducted and we will let you know when the situation has been resolved or if additional precautions should be taken. The water system is running additional tests to verify the severity of the microcystin levels in our water supply.